It’s been a while, I know, but I’m back with a few more things that I have come across.

Yesterday I was going through a few of the boxes of photographs and something struck me as quite odd. There are quite a few really old ones - family from the late 1800s/early 1900s; many pictures of friends and views of their houses - I imagine after the war people were pleased to have somewhere safe to call their own. Then there’s a small selection of Frank, Ivy and their son Peter as a young boy, or at least, I think it is him. But after that, there is a huge “Peter” gap of nothing! Why is that? Did he have children and they took the photos when he passed away, leaving the others? Or perhaps not all of them made it to the auction? I don’t know yet.

I did come across a “Jessie” picture though which reminded me that I had briefly mentioned it before. Let’s take a look a see what we can learn. 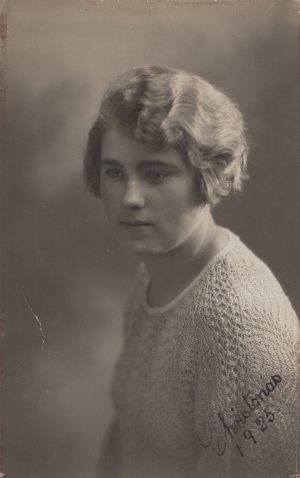 There she is! Fortunately, we are blessed with a date in the bottom right corner, signifying Christmas 1925, which makes things a whole lot easier. Was this a kind of present to herself at Christmas which she gave a copy to others as gifts?

She’s obviously a young girl and as such, would have been keenly aware of fashion and how she looked. If you take a look at her hair, you can see that it has been carefully styled into waves, which was very common during the mid 1920s, so that fits, and is very similar to this example from the same website.

Her writing (I’ll assume she wrote the date) is quite distinctive too - it reminds me of a younger person trying to be neat but not having the years of experience to do so in a fluent, flowing manner. See how it seems a little strained and almost nervous, whilst still showing signs of care?

But how old does she look? I’d have said mid to late teens so does that fit with what we know about our Jessie? Yes, it does!

This came from the 3rd quarter of the 1908 Civil Registration Birth Index which means she was born in July, August or September of 1908. She has a distinctive name and after double-checking, Jessie also pops up in the 1939 census record.

You might be surprised by the surname Wheeldon - it was Ziehen as you remember. Well, as shown in the main picture of the last post, she married a man named Basil Wheeldon and above, you can see her mother, Elizabeth A. so I am certain we have the same lady. 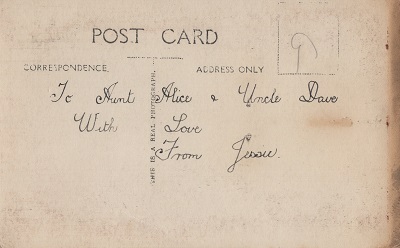 To Aunt Alice & Uncle Dave, with Love from Jessie.

I really like it when I see someone sign their name. If you think about it, how many times have you signed yours over the years? It’s the one thing that doesn’t really change, at least not the first name, and is intimately personal. It’s that same distinctive writing too, so we can be pretty sure Jessie wrote the date on the front.

My next question is: who are Aunt Alice and Uncle Dave? Jessie feels too young to be married and in fact, I know she isn’t because that happened in 1930 to Basil Wheeldon, so one of these must be either her mum or dad’s sibling. But which?

That reminds me of another really cool thing about family research. Keep your eyes peeled because sometimes you get little breadcrumbs that can lead in new directions - neither of these people are on my tree so I now have a new target for my search.