Well, they are in their new home. As you can see, the picture is only of the letters - there are boxes and boxes of pictures, but for now, I am going to focus on these.

So far, what I know is that they are mostly one sided - the vast majority are addressed to a Peter Hearson and they are being sent from “Margaret”. I’ve had a quick look through some of the photos and the name Ziehen appears which I think is possibly Peter’s mother.

Sorting out the letters into months took an age and that was with the help of my daughter. It’s surprising how difficult this can be - not all of the letters have dates, some of the envelopes are tricky to read (you can see the magnifying glass!) and many of the letters are envelope-less. This could be a mammoth task but at the same time, quite exciting.

Actually, I should say what I am hoping to do with all of this. I’ve already said that I love family research but one of the most frustrating things I have found is trying to obtain photographs or mementos of family that have passed. Sadly, not everyone cares as much as I do and that’s fine, but you never know who else in your family might love this stuff or whether your children or their children might want it. Once it’s gone, it’s gone, as they say, and I am hoping that I can find a member of the family that would appreciate this. To that end, let’s see what we know so far. 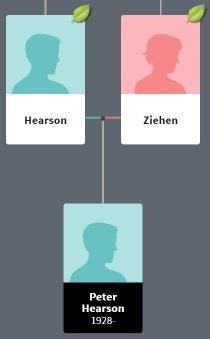 Finding Peter on Ancestry was easy. He just popped up in under 2 minutes which was fantastic. His birth record mentioned that his mother had the maiden name of Ziehen which is very handy and of course his dad will most likely have the surname Hearson. I need more information to get any further, though.

I am left with some pressing questions though: who is Margaret? Why are none of her letters here? Did they marry? If they did, surely hers from him would be in the same place?